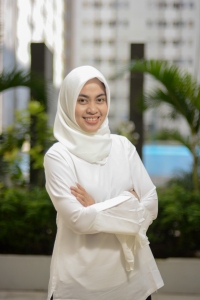 The name is Renata Melati Putri. I prefer to be called Rere—which I know it is hard for the non-rolling-R language speakers. I have a Master’s degree in International Sport Development and Politics at the German Sport University Cologne, Germany. The program gave me an intensive exposure to the empirical evidence combined with the theoretical approaches to sports development.

I am aiming for a career which enables me to provide a research-based policy for long-term sports development taken from in-depth analysis regarding specific sport politic and governance issues in Indonesia. Further, my interests also include the impact of mega sporting events and its management.

Currently, I work as an independent consultant and researcher. My projects including political risk analysis for mega sport event, athletes’ 360, elderly sport, safeguarding in sport, and Sport for Development (S4D).

I started my journey, in 2018, as a sports policy researcher to provide adequate solutions to the current national issues with Ganesport Institute, an aspiring sports think-tank in Indonesia. The institute runs under Ganesport Foundation, a non-profit organization which envisions sport as a catalyst for social development. My objective as a researcher, beyond consultative purpose, is to build a solid record for my application for a Ph.D. My current research project with the organization is a case study on the fight against match-fixing in Indonesian football federation.

In the summer of 2017, I had an internship in the National Olympic Committee of Indonesia (KOI) in Jakarta. I assisted the General Secretary in managing the day-to-day inter-department as well as inter-organization correspondence. I also liaised the NOC to the government (the ministry of youth and sports) during the 29th SEA Games, 2018 Asian Games and the preparation for Youth Olympic Games in Buenos Aires.

Prior to my current degree, I obtained a B. Ed degree in Physical Education, Health and Recreation from the State University of Surabaya (UNESA) in Indonesia. The degree had provided me an opportunity to work as a physical education teacher at Chitkara International School in Chandigarh, India. The responsibilities included planning and evaluating, managing the U-15 basketball team for the municipal-level inter-school competition. As an international teacher, I also involved in the marketing team and contributed to the English club.

During my bachelor program, I worked for the national sports committee (KONI), as a volunteer as well as a freelance assistant which gave me a lot of exposures to sports issues in Indonesian sports bodies. I had the honor to take part as an Indonesian Youth Representative in the Olympic Council of Asia (OCA) General Assembly on the 2019 Asian Games Bidding—which shifted to 2018 in Macau, China.